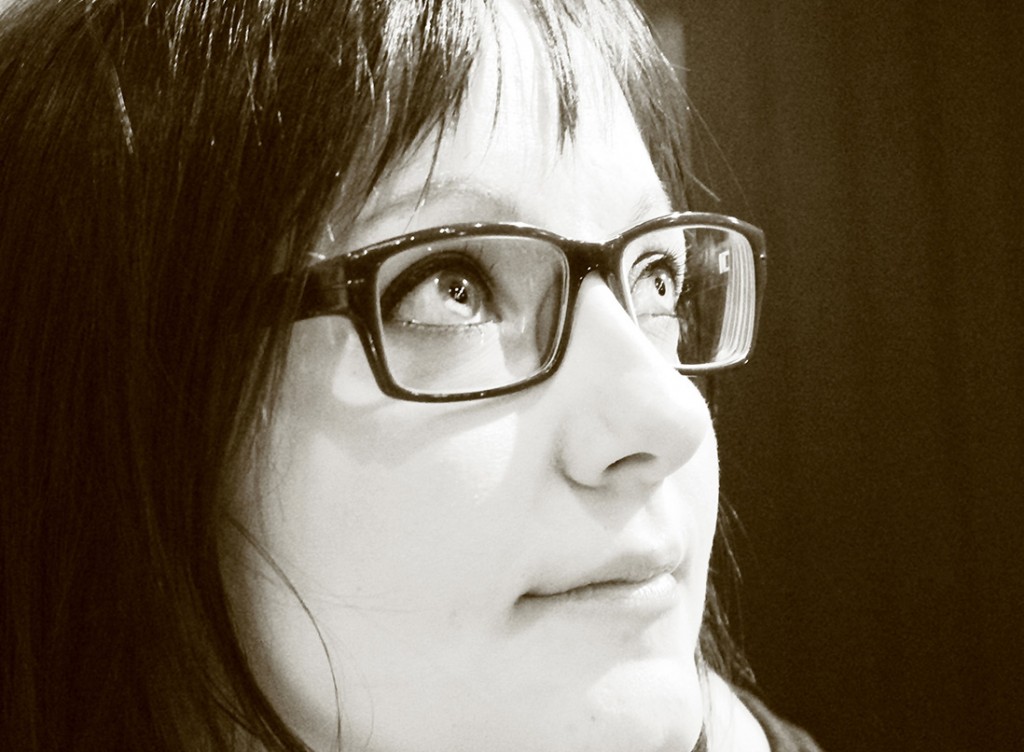 Saturday morning, coffee in hand. Woken from a restless sleep, drifting in and out of muddled dreams while soft June rain watered the summer-dry world. It took a boisterous dog, a wide-awake husband and the smell of coffee to finally drag me out of bed. Even then, my foggy head went straight for my favourite sofa cushion, all plush and smooshy comfort. The coffee machine spluttered. Griffin strutted to and fro, wagging his tail. This is what Saturday mornings are for.

This week was bright hot sun and ice-water relief, post-workout headaches and late evening meetups, friends and blankets on grass in the calming sunset weather. But today is gentle and cool, and we open the door to let fresh post-rain winds blow in. A hint of green fields, somehow dry and damp all at once, and memories of camping; tents on wet grass, rain drops on canvas, cosy curled-up fleece mornings in fold-up chairs, hot tea to guard against the fickle British summer, make-your-own sandwich scrambled-egg breakfast-in-the-wild glory, then off to the woods or the beach or jumping into cool lakes and float on water, close my eyes and try to become part of nature, be so quiet and still and malleable that She might take me in and keep me.

Quarantine has turned a mirror on us all, but now it seems we have dealt with whatever we saw and we’re crawling out of our hideaways with some new-found focus, strength built from the rubble of our insecurities. We have faced ourselves and we survived. We have decided what’s important to us. We have had some time to think. We have slashed our machetes through the jungle of our pain and somehow found a way forward.

This month I’m doing another writing challenge with my group of storytellers. We set a word target and write together-apart, connecting online and sharing our successes and failures. It’s good to be back on track.

Through the living room window I admire the neighbours’ giant silver birch, rising over thirty feet and swaying in the damp dawn winds. That is summer to me – the whoosh of the breeze combing through its leaves, bringing it to life, blushing as it invites it to a slow dance. Beneath this proud birch is our modest little garden, which we have finally turned into our own little summer paradise.

To my right Griffin is snoozing obediently, knowing that Saturdays are slower than other days and walkies will wait a bit. In front of me sits the most beautiful boy in the world, and he’s always there to make my heart flutter and have me laugh so much that I have to lean on the furniture to steady myself.

Summer is here, and I feel alive, present, grateful. Fleur feels close; I can feel her wriggling under my skin, ready to hatch. She comes and goes, but for now, I’m holding on.

These nights, that happen on a whim.

These nights that take us stumbling down Orange Street in search for more. More what, we’re not sure, but we want more.

These nights of shots and secrets; these nights when, for a brief moment, nothing matters and we can just let go.

These nights when we get kicked out of bar after bar as the bells ring their sad song of endings.

These nights when we shed layers of ourselves and bonds are formed between the shapes that hide underneath. These nights when the stars pulsate through our blood and we can feel young despite the years forever chasing us.

These nights, when the world blurs and edges soften and we find we are still alive. 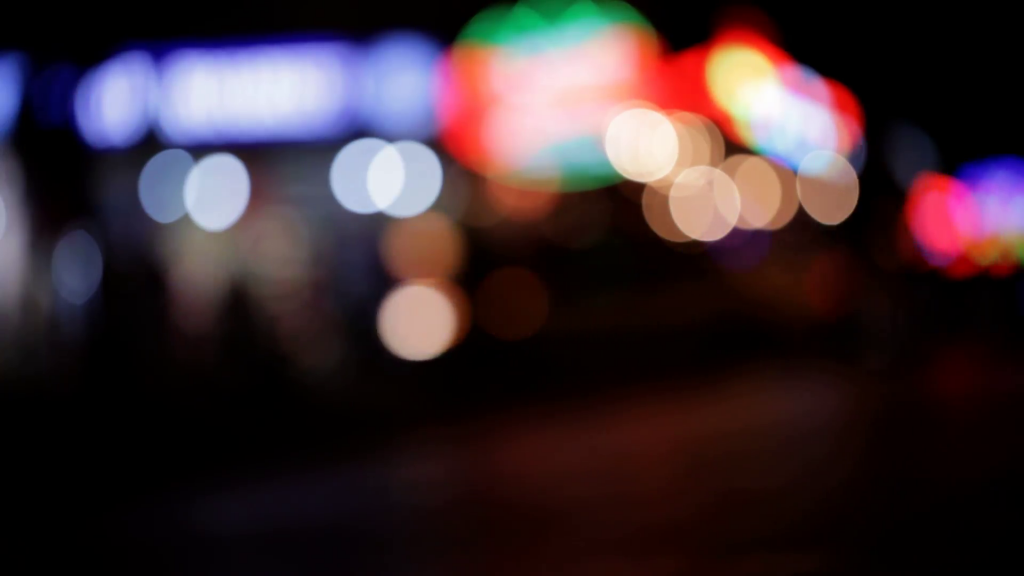 Veronica is my crazy, colourful, all-over-the-place, vain, contemplative, scatterbrained friend from school.  She is a mother of three, and an amazing artist – the stuff that pours from her head onto paper is just beautiful and completely insane. She’s been to visit me six or seven times, and each time I am reminded of why I love London. 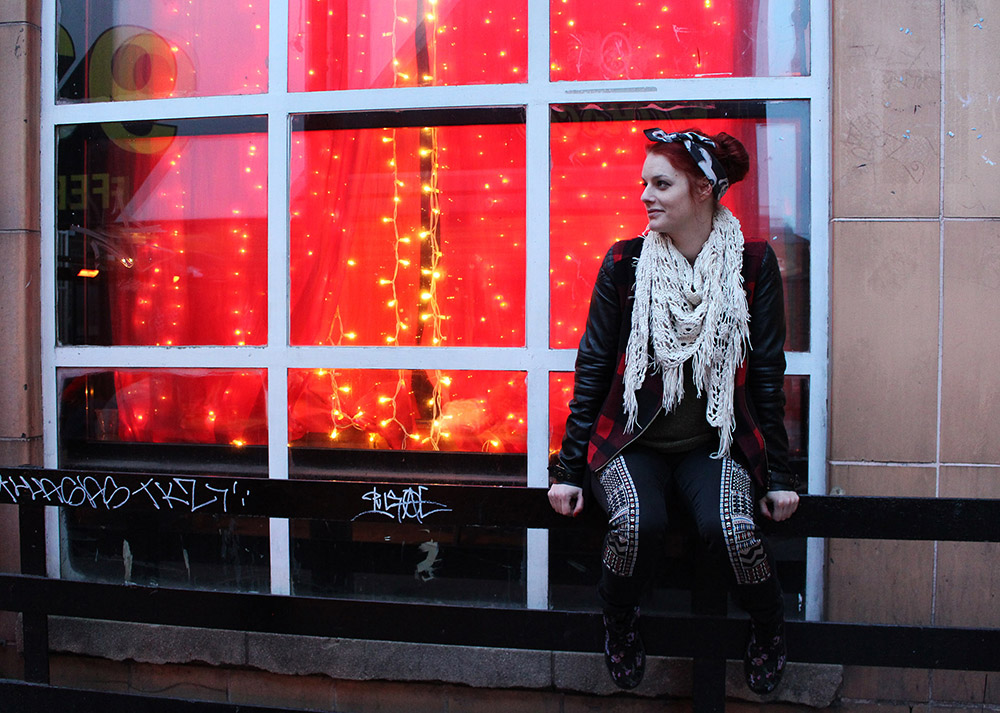 Naturally we headed to Camden, not only because it always delivers, but also because Veronica’s man Markus had never been and it’s always great fun to bring a freshman to experience the madness for the first time.

As always, it was busy and noisy and full of tasty food and colourful crafts, and Cyberdog still awakens the raver within me. The lights and the tunes remind me of epic nights spent in pimped-up warehouses and obscure vaults, dancing for hours and having the best conversations with strangers. Like Magnus, a guy I met in a balloon queue once. He had slaved away in the same office for twenty years, and one day he had walked up to his desk and just couldn’t bring himself to sit down. So he didn’t – instead he moved to London, got a mohawk, and started raving. We high-fived and felt smug about our respective escapes.

(Spring is coming – perhaps it’s time again? I still haven’t been to Whirl-y-Gig…)

It was bitterly cold and we had to keep moving, so after a brief amble through the main parts of the market we headed for the bars. 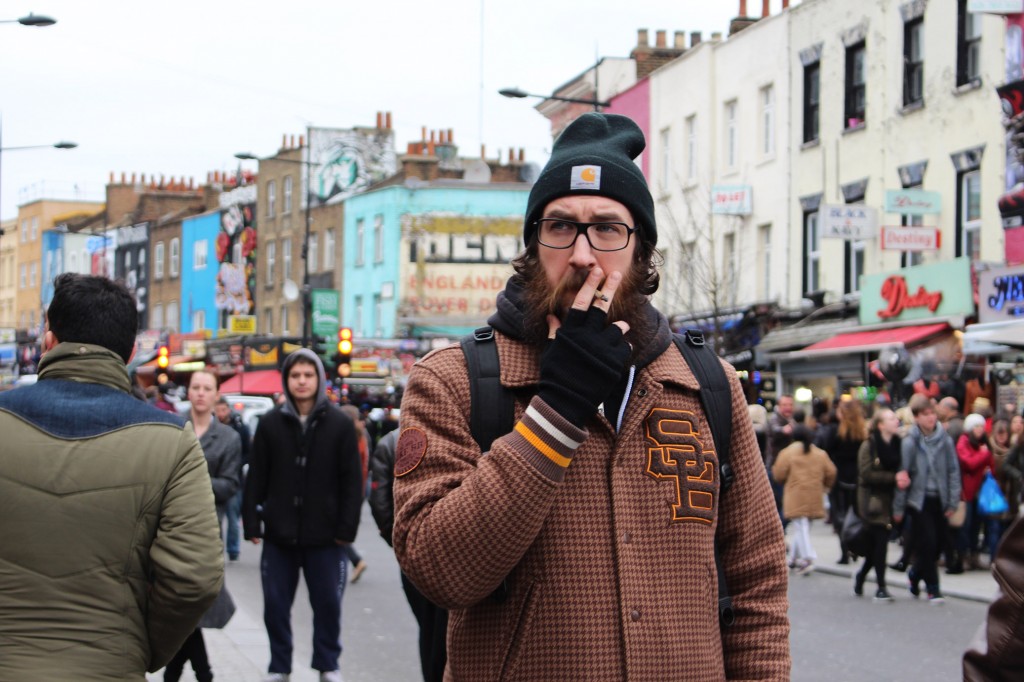 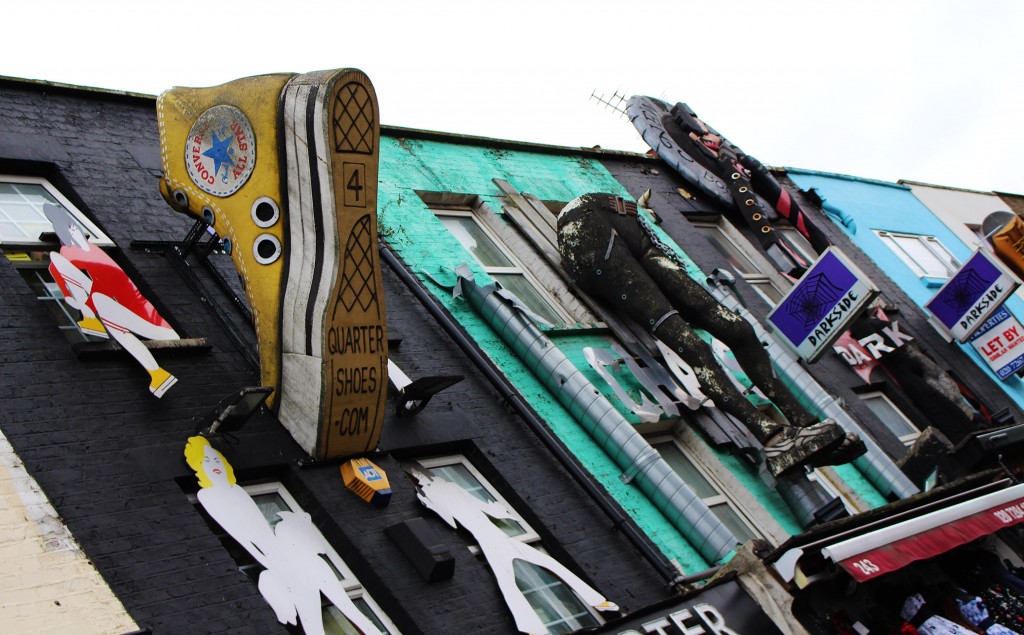 We met up with old friends from around the UK and caught up on each other’s lives in the Blues Kitchen. Once upon a time Veronica, our splendid photographer and philosopher friend Sarah, and I were stumbling home from a Greenwich adventure, and one of those chance meetings happened when we ran into two friendly chaps whom we later got to know as Rus the Viking and Henrik the German. They were getting on a bus to the eastern docks, and we spontaneously hopped on and spent that night in convivial company and fervent discussions about life, the universe and everything.  The following night they brought us to the Wibbly Wobbly, a boat pub (which has now sunk, boo!) where we wobbled with pints and the pub cat and yet more intriguing conversations with Rus and his cheery housemate, Kamil.

(That’s Rus below, but he’s hiding behind a mystery cloak of viking hair and is thus difficult to capture on camera.) So we reunited and drank and were merry, and bumbled from bar to bar. 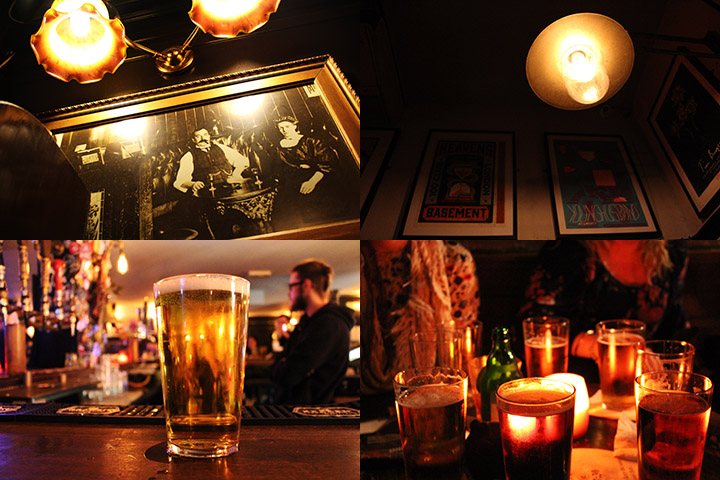 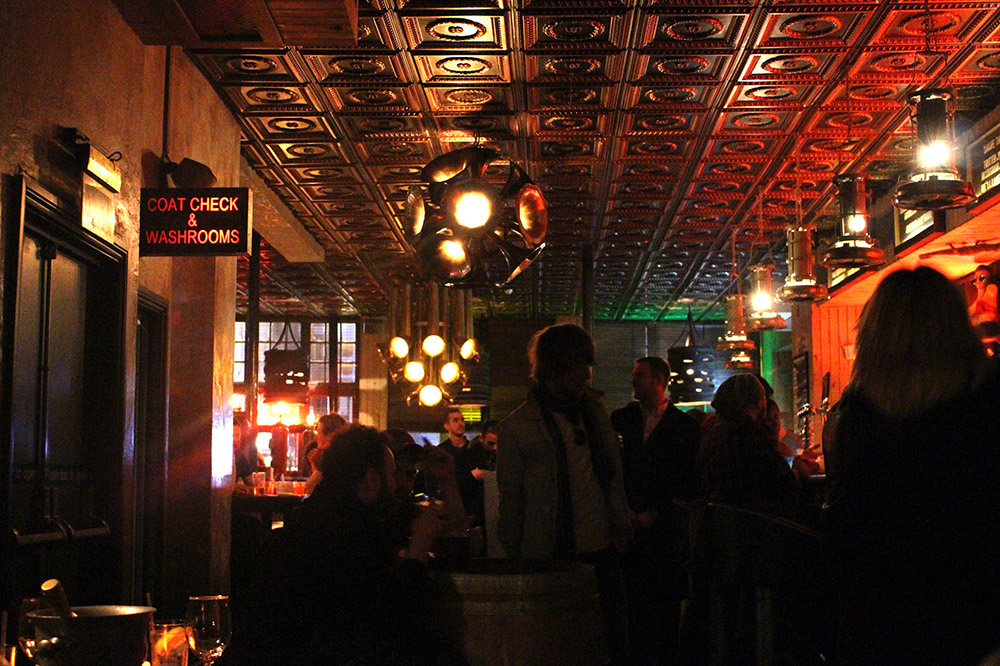 Once, some years ago, we met Veronica’s KAW friends, and we all sat on top of Primrose Hill and laughed and drank ourselves silly to the most perfect sunset over the glinting city lights. Two girls from that splendid evening, Kayley and Erica, also joined us for our Camden outing. 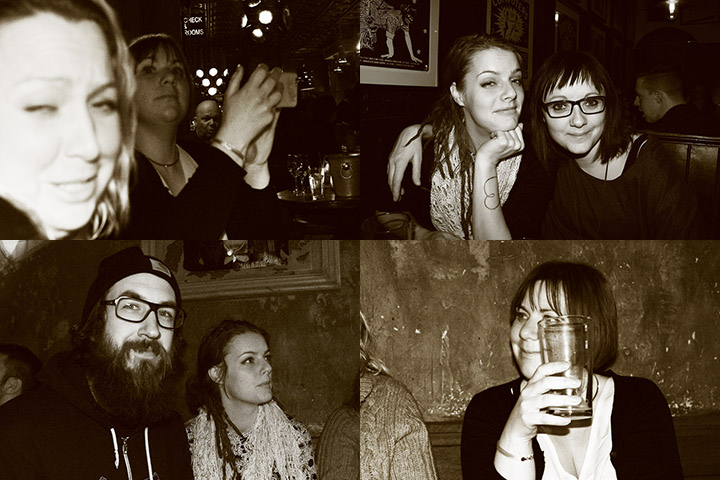 As the night wore on, people said their goodbyes and got their last trains. Veronica, Markus, Mike and I took a stroll along the canal and ended up in World’s End. I’ve said it before and I’ll say it again – I can’t wait for warmer weather so that I can spend more long nights along these canals, which reflect the city and attract vibrant picnicers and other such fun folk with whom one could spend a carefree summer’s eve and never meet again. Ah, the sweet magic of summer. 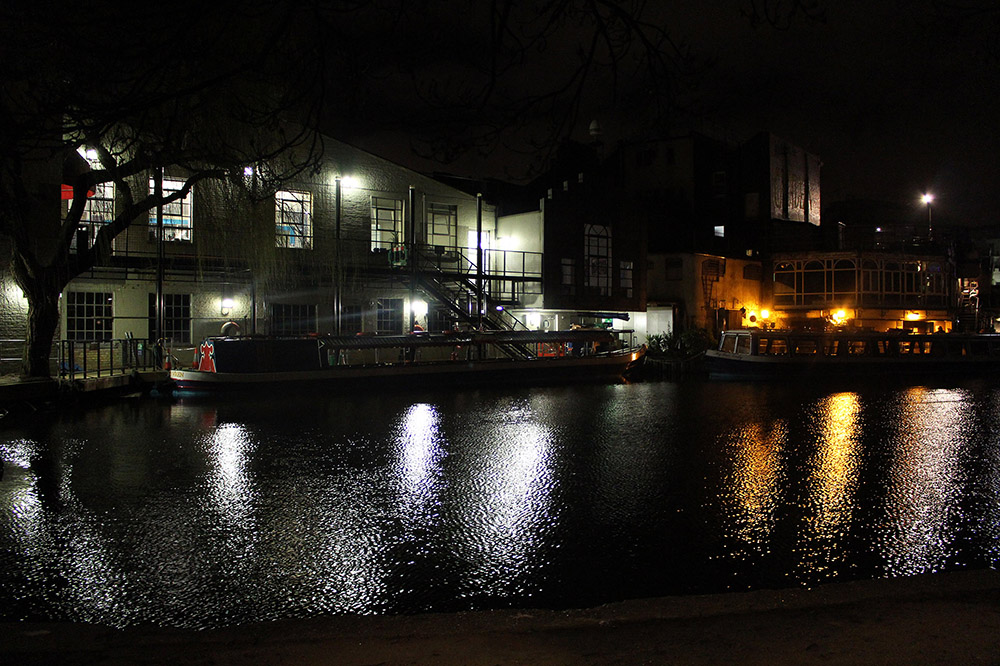 The next day it was just the four of us, and after a Full English spiced with Gammeldansk (“Gør godt om morgenen”) we strolled through the spraycanned streets of Shoreditch, went to the Backyard Market and bought ridiculous necklaces, and Veronica drooled over vintage art while I stared in horror at empty-eyed taxidermy creations. 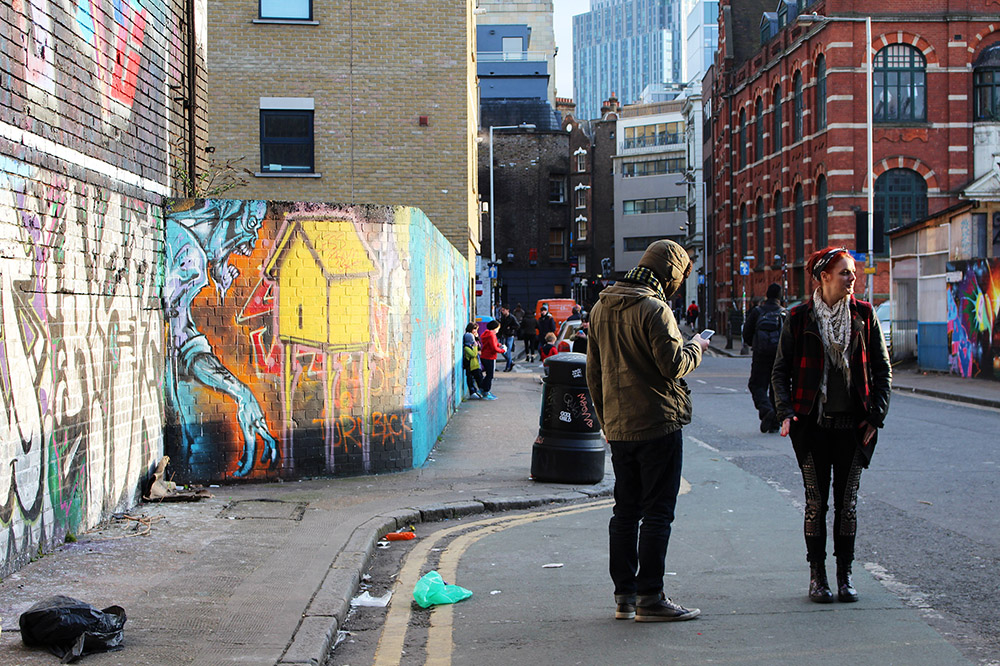 When it got dark and cold, 93 Feet East called us in with their generous seating areas and comforting heating lamps. I quizzed Markus on what it’s like to tour with a band in America, as he has done more than once, and I took mental notes for a novel which is brewing somewhere in my brain, to be fully formed at a later date. 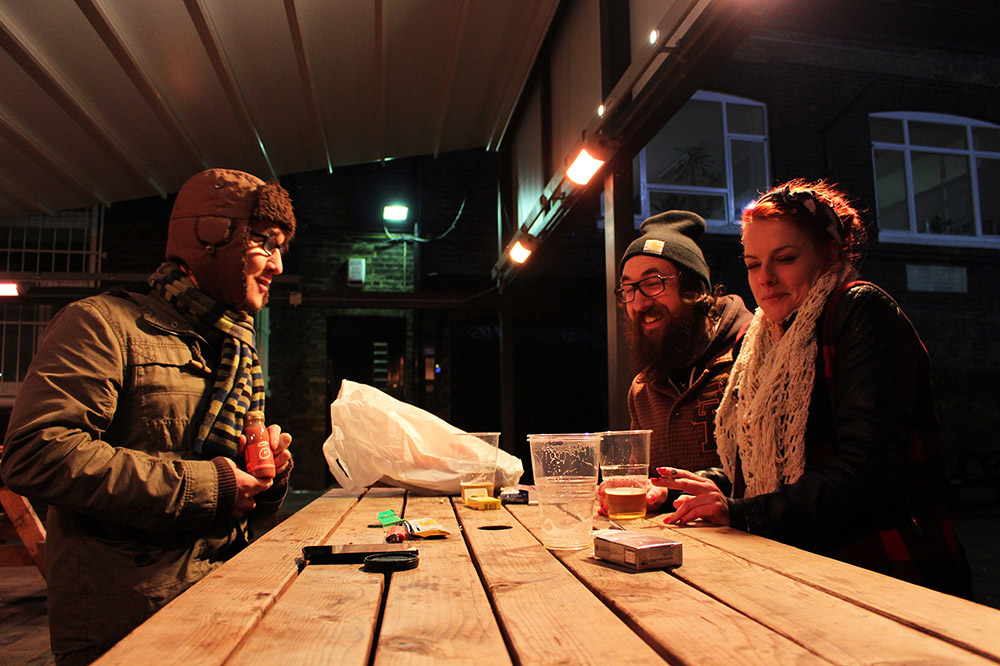 And as naturally as flow follows ebb, we ended up in Café 1001 because that’s just what we do. This is my old hood – this is where, before the smoking ban was enforced, the big chill boys of East London would sit sprawling in leather chairs and smoke spliffs to the relaxing beat of Jamaican reggae, and Karin and I would sit here with our cans of Red Stripe and feel young and free.

Café 1001 always works because it has everything you need for a good day and night – start in the outside seating area where you can have a barbecue, a smoke and a chat while the sun set betweens the tall brick walls. As it gets busier, move inside and buy yourself a vegan dessert in the downstairs seating area. When evening hits, go up the stairs and hang in the chill-out area for a bit, chat, drink, warm up. And then go through the rabbit hole to the dance floor in the back, where you can easily disappear in rhythmic beats until the wee hours. Sorted. 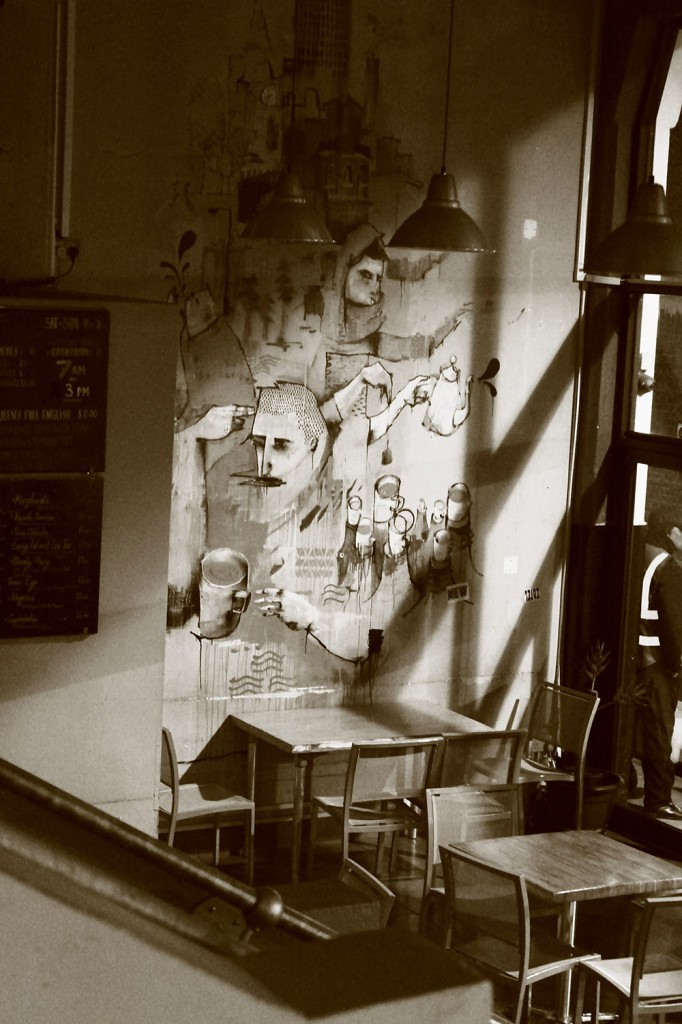 It was fun and beautiful and busy and educational and utterly exhausting, and after they had gone home life felt a bit empty for a while, with nothing left but a bottle of Gammeldansk and a delicious Marabou Mjölkchoklad. I went back upstairs and carried on painting the skirting boards. Friday night I was buzzing all the way to town, literally grinning and skipping my way down Gray’s Inn Road towards the arcade dive bar PimpShuei, where the legendary Clinton Cawood was celebrating his birthday: Clint is a living legend, because he is a machine of parties and love. There are no limits to whom he can love and what he can drink. Eight years ago he walked into the bar where I was working and my life in London completely changed. And now he has the most amazing other half, Jeanne who is deliciously care-taking and plan-making and always glows with beauty: 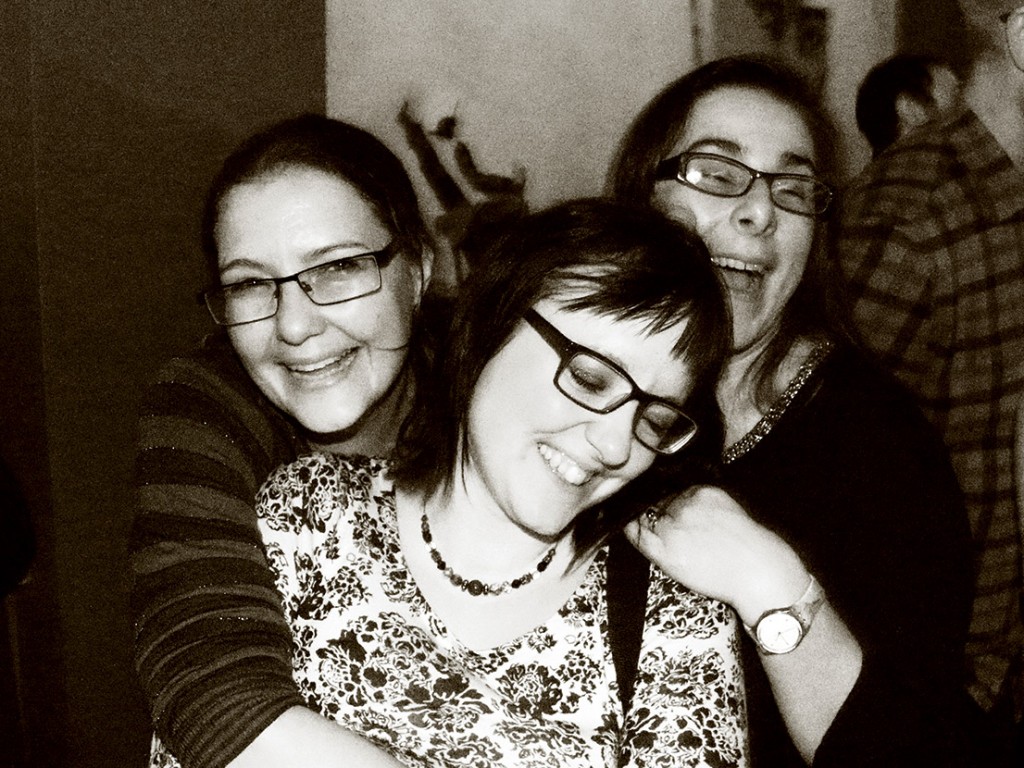 We danced and drank and shouted storied that could only be half-understood over the noise, and I felt free and alive and bubbly with joy and love for all these people.

“And disappear again into a summer’s bliss,
Of staying out and sleeping in and getting drunk with my friends”

Then Veronica and Markus came with their suitcases straight from Gatwick to the basement technicolor dunka-dunka madness. Between arcade games and cigarette breaks, Elvis and Bruce Lee, catching up with old friends and making new ones, at some point the birthday boy got behind the bar and suddenly the price for tequila was no longer £5 but a bared chest, so shirts flew off and sticky liquor was poured straight into people’s faces. 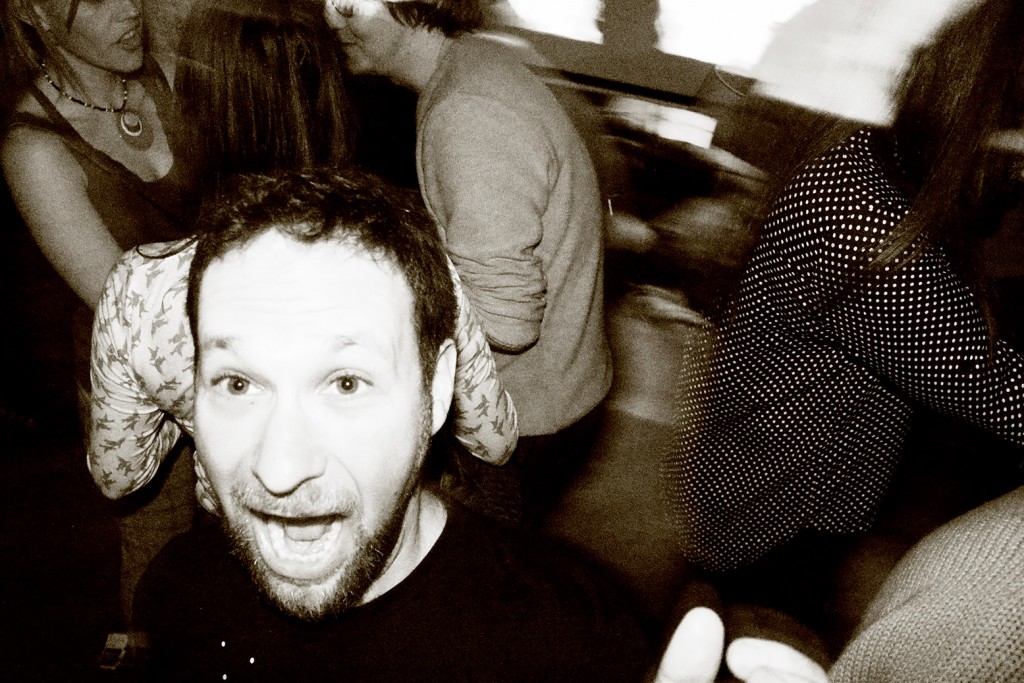 Much too early the night wore off and people dispersed, and Mike and I grabbed our two Swedish guests and stumbled our way to a hotdog place. Clinton’s generous tequila servings had made Mike rather floppy and when waiting for his hotdog he looked like this: 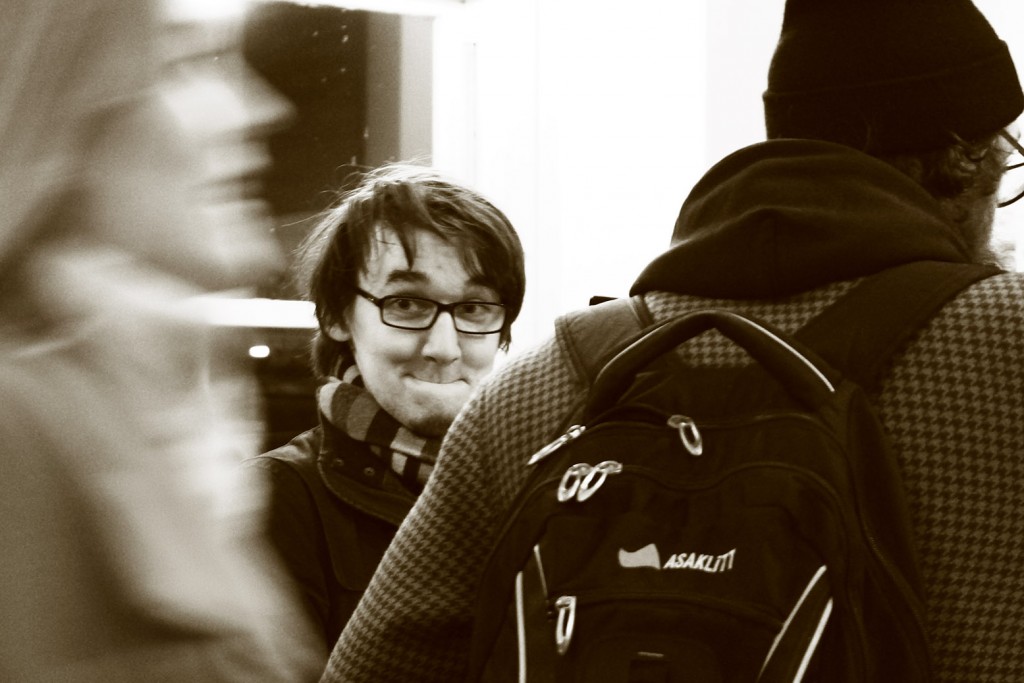 What an adorable creature.

Then Uber came and took us all the way home (I love taxis, what an amazing concept), and in the midst of the DIY chaos we settled down for a Gammeldansk nightcap before gratefully crashing into bed, saving some energy for the rest of the big weekend.